Do you ever wonder if as one person, you can really make a difference?  Anna Tobolski felt that way as she looked for a way to honor her niece, Emma. Here is Emma’s story in her aunt’s words:

Emma was born in 2004. She had strawberry blonde hair, and the biggest blue eyes; as she got older, those very eyes would give her away when she was being mischievous. At 12, she was learning French and already studying for the SAT – she wanted to be a lawyer when she grew up. Emma was awarded a full scholarship to a private girls’ school in England. They were just getting settled over there, when Emma fell one day and hurt her hip. She kept complaining of pain, but the doctors kept assuring my sister that it was just soreness from her fall and would eventually get better.

After several months of increasing pain, the doctors finally conceded to giving her an MRI – and discovered the cancerous tumor on her hip. Five days later, after emergency chemo, we were invited into a small room with her doctors – that conference will forever be ingrained in my memory.

We were told the tumor had begun in her pelvic area, and had already metastasized to both hips, femurs, spine and colon. It was stage 4 multifocal osteosarcoma – bone cancer of the worst kind in the worst place. The words uttered were completely incomprehensible…

“Palliative not curative, there is no treatment, months at best” 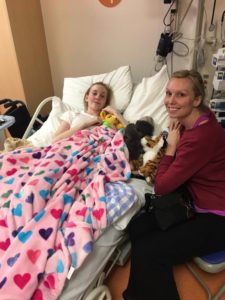 How could a healthy-looking child with a hip complaint be months from dying? In a total of four short months, she went from an advanced healthy student to losing all independence – she lost the ability to walk, then sit up, then arm movement. She lost her vision, and the ability to talk to us – we couldn’t touch or hold her because the pain in her bones was too great, so sweet head rubs became our coveted interaction.

With all of that in mind, it would be easy to imagine that Emma grew bitter or angry about the cards she had been dealt but that wasn’t the case. Despite her suffering, her amazing strength always shined through…the days before her death, she was wearing her favorite t-shirt: the front says “Blessed” and the back read Ps. 31:25 “She is clothed in dignity and strength.” That was our Emma.

As she grieved the loss of her niece, Anna knew she needed to do something to honor Emma’s memory but wondered if her efforts would really make a meaningful difference. 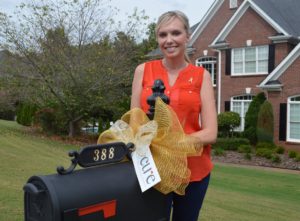 Anna sent out an email to the homeowners in her neighborhood and solicited local businesses to put the bows out. She even ordered extras for places like city hall and the local public schools to display. Her goal was to sell 100 bows and, consequently, show that Dawsonville cares about children with cancer. Anna surpassed her goal, selling 175 mailbox bows by the time she was through.

“Sometimes I wondered if all the time spent on this campaign would really make a difference – what can a gold bow really do?” Anna said. “But I came to realize that if a gold bow makes an impact on one person it was totally worth every tear and minute spent. In the grand scheme 175 bows isn’t a lot, but it’s a great start and I know I can do even better next year.”

Anna’s efforts absolutely have an impact. Combined with others across the state, mailbox bows raised more than $70,000 in 2018.

“With the money raised through gold bow sales, we were able to pay for 14 children who had relapsed to undergo genetic testing in hopes of identifying drugs that would work for them,” explained Kristin Connor, CURE’s Executive Director. “Without this, these children would have had very few options available to them. Do efforts to sell gold bows make a difference? Ask those 14 children and their families!”

There is still time to get a gold bow for your mailbox and make a difference for kids fighting cancer.