By Mark MyersDecember 14, 2020No Comments

Making a Difference Through Community

Effingham County resident, Catie Wilkins was diagnosed with an aggressive brain tumor on her first birthday. Catie fearlessly fought her cancer, but the chemotherapy compromised her immune system so severely that she succumbed to a common virus before she reached her fifth birthday. In response to this tragedy, a special community has formed that is making a meaningful impact in the fight against pediatric cancer.

Effingham County sits on the Savannah River and while it has grown, it still boasts the small-town feel of its agricultural heritage. It is a place the Wilkins family is proud to call home. In the aftermath of their tragic loss, they knew Catie would want them to help other families, so they founded a Named Fund at CURE in her honor.

“Catie’s treatment was hampered by a lack of available options,” Jenny said. “There has been little research in treating childhood cancers, and our family felt that this needed to change.”

Their community embraced Catie’s Fund from the beginning. This year, the fund surpassed an incredible milestone by raising more than $2 million since its inception. This wouldn’t have been possible without people like James Carlson.

James owns Carlson & Company, and while he has no direct tie to childhood cancer, he has seen local families struggle while going through treatment. He and his company are actively involved in the Catie’s Gathering dinners, the primary fundraisers for Catie’s Fund, and donate event space, tents, and food.

“I’ve watched Catie’s Gathering evolve from hostesses using paper plates and plastic forks to using fine china and silverware,” James laughed. “I’m proud to be a part because of the impact it allows CURE to have in our community.”

The schools in Effingham County have been a huge part of the success of Catie’s Fund. The leadership at Springfield Elementary School wanted to impress upon their students the value of making a difference.

“We had a student who fought cancer, and we wanted to give the kids ways to help,” said teacher, Allison Brand. “Through dress-down days, coin drives, and other fundraisers, we’ve been able to contribute a lot of money. It’s great to see the kids really get into helping other kids.” 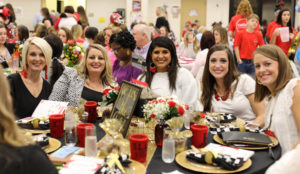 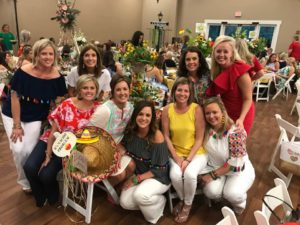 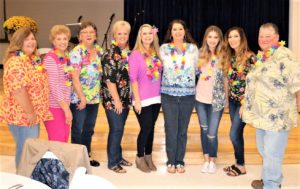 Apryl Lee attended a Catie’s Gathering event and felt the need to pitch in. Apryl founded a local SLAM (Sweat Like A Mother) group. This is a community of mothers and their children with a goal of fitness and health. While they celebrate their healthy children, she has used her forum to raise awareness and money for Catie’s Fund.

“I wanted to set an example for my children,” Apryl said. “I want them to know that we do what we can, when we can, to help others.”

Being next door, adding a Catie’s Gathering dinner in Savannah was a natural progression that became a reality in 2013 when Mandy Garola attended the Effingham event while her daughter, Cora, was in treatment. Seven years later, the Savannah Catie’s Gathering continues to thrive and has been supported by individuals and businesses, such as Coastal Electric, which has become the event’s title sponsor.

Thanks to the efforts of friends like Jody Polk, the Catie’s Fund community spread even further. Jody’s daughter, Anna Hays, is a leukemia survivor, and five years ago, Jody brought a Catie’s Gathering dinner to Statesboro. After the death of a local child, Morgan Frison, Jody spoke of what motivates her.

“Morgan’s life held such beautiful potential,” Jody said. “Morgan and children like her are the reason that I will continue to raise funds for CURE and push for less harsh treatments created specifically for children.”

Likewise, longtime friend of the Wilkins family, Angel Shurling, started a Catie’s Gathering event in her hometown of Bryan County four years ago.

“There were two children in our community who were diagnosed with cancer,” Angel said. “Every heart was open to them, and people wanted to make a difference. Catie’s Gathering gave them that chance.”

Thanks to their amazing and ever-growing community, the Wilkins family, Catie’s Fund, and all those involved are making a huge difference in the lives of children fighting cancer today and those yet to be diagnosed. It has become a beautiful legacy for a little girl taken too soon.