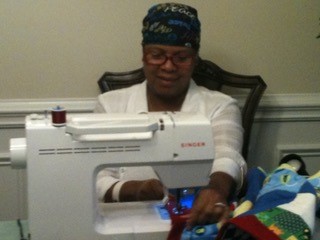 Sitting with her husband in their Charlotte home, Kim Griggs appreciated the comfort and warmth she felt underneath the soft afghan that covered her. Diagnosed with triple-negative breast cancer, Kim was struggling mightily with debilitating mouth sores brought on by her treatment. As she rested, her mind began to wonder how hard it must be for a child to endure chemo and have such painful mouth sores. Her heart sank as she considered a child going through this same pain.

“I was under that comfortable blanket and it just came to me,” she said. “I’m going to make a quilt for a child.”

The idea brought her excitement, but was fraught with problems – chief of which was that even though her grandmother had been an avid quilter, Kim had never made a quilt before! But she quickly determined that fact wasn’t going to stop her. When she felt better, she went to a quilt store for advice. Soon after, she was taking pants to a neighbor to be hemmed and discovered that this friend had a quilting machine and taught classes. So she enrolled and her journey began.

Quilting became a focus for her and a distraction from her own treatment. The activity kept her moving. As she worked, she prayed over each one, praying that they would bring comfort and healing to the child who soon lay underneath. She named her mission, Quilts of Virtue. 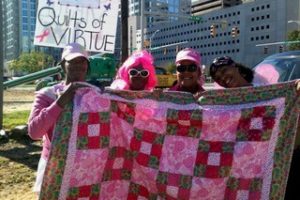 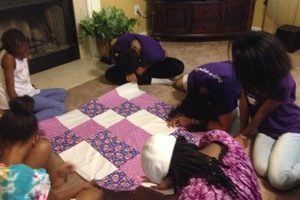 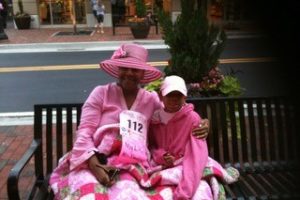 Before she finished her own treatment for her own cancer, she had made thirteen quilts to give away. That last one was sent to a little girl in Maryland who would soon pass away. The girl’s mother sent Kim a letter thanking her for the quilt and told her that her daughter had been under it when she passed. She now sleeps under it every night.

“After I finished weeping for that little girl’s family,” Kim said. “I was glad I had sent it and now it meant something special to her mother.” 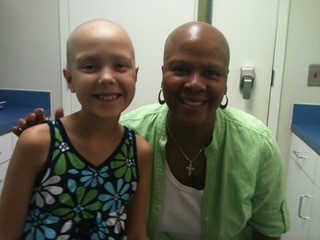 Kim would move back home to Atlanta soon after her treatment concluded. In all, she had four rounds of chemo and thirty-six rounds of radiation and now she is a six-year survivor.

“My health is really good! I am blessed!”

Of course, she has continued to make quilts for children fighting cancer. In Atlanta, she linked up with CURE and asked for the names of three children who wanted a quilt. CURE also discovered things the children liked so that Kim could make each quilt special and unique. When she finished those three, she asked for three more names. That cycle continues today. 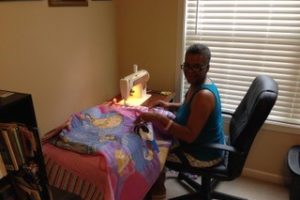 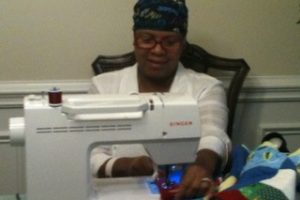 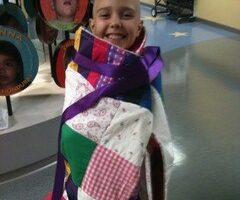 And she still prays comfort and healing over each one. In fact, she began mentoring young ladies at her church where she started a ministry called Kingdom International Missions. She hopes to pass on more than just the art of quilting. She wants to instill moral truths and teach the girls to be considerate of others.

All in all, Kim estimates she has made nearly one hundred quilts for childhood cancer patients; each one as unique and special as the child it comforts. She doesn’t have plans to stop making them any time soon.

“I don’t believe in retirement,” she laughed. “I’ll keep making them until the end.”

Kim’s goal of bringing comfort to children fighting cancer aligns with CURE’s mission to walk with patients and their families as a resource and friend from diagnosis, through treatment, and beyond. We are grateful every time we can spread one of Kim’s quilts over a patient, knowing the comfort and hope it will bring.