The Value of Christopher’s Diamonds

Many people go their entire lives without discovering the things of greatest value. Others have experiences which teach them what is important, and some seem to be born with keen intuition. Christopher Wessels finds great value in the “diamonds” he collects. But the most important thing to him isn’t hoarding his gems, he prefers putting them to work for others.

When Christopher was three years old, a distended stomach sent his family to the emergency room, where doctors diagnosed him with a stage IV Wilm’s tumor. He spent the next seven months in a fight that included chemotherapy, surgery, and radiation. He became a frequent flyer with trips between the Atlanta and New York hospitals where he received treatment in which he lost a kidney, an adrenal gland, and several lymph nodes. But on March 15, 2015, Christopher was declared “No Evidence of Disease.” 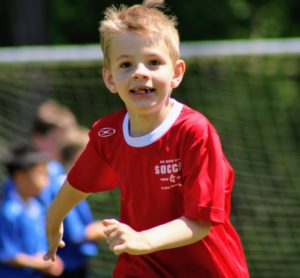 He has spent some additional time in the hospital due to asthma but is doing great today. He is a part of the survivorship program which entails an annual scan to make sure he remains cancer-free. This freedom from treatment has given him more time to pursue his precious diamond collection. Christopher sometimes gets caught smuggling them into the house, and many of the precious stones that make it home go through a special cleansing process along with the rest of his laundry. A six-year-old often forgets to empty his pockets.

Christopher mines these treasures all over the place: friends’ yards, city parks, and family vacation destinations. Rarely a day goes by when he doesn’t spy at least one diamond on the playground at his school. Once he gets his diamonds home, they join a display he has created in his playroom.

These diamonds are extremely valuable to this avid collector. Far more valuable than that, however, are the lives of the young children who, like Christopher, are at risk due to childhood cancer. When he learned he could help other children facing cancer by selling his coveted diamonds, Christopher willingly agreed. 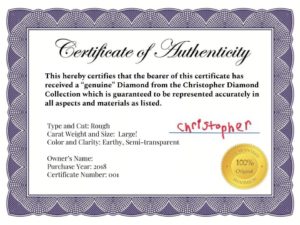 Christopher’s family created a team at CURE Childhood Cancer’s annual Lauren’s Run. Team Courageous Christopher sent letters and emails offering his diamonds in exchange for a donation. Each diamond came with an original certificate of authenticity. His supporters immediately recognized Christopher’s passion and the value of such a prized collection. Orders and donations began pouring in.

The Wessels took time off for a family spring break trip where Christopher admitted to feeling some pressure. At a souvenir shop he showed his mother a bag of diamonds he needed to buy out of concern for the high demand that was outpacing his stock levels.

In the end, Christopher fulfilled all of the orders, and his team finished as one of the top fundraising teams at Lauren’s Run with an amazing total of over $11,000! Christopher is already prospecting for new “diamonds” to replenish current inventory levels for his collection.

Whether it was through his experience with cancer or just in his nature, this six-year-old has a keen eye for what is truly valuable in life and is an example for all.