Many people want to play basketball at an elite level. But only a few possess the necessary talent, and most wouldn’t be willing to put in the work required to get there. As all eyes turn to the NCAA and March Madness, one young lady will watch a game or two only if her workout schedule allows it. 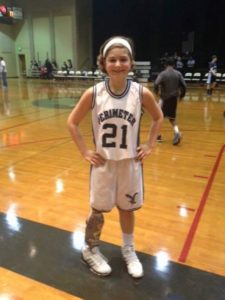 Basketball has always been Bailey Moody’s favorite sport. After bone cancer forced a partial amputation of her right leg when she was ten years old, she wasn’t sure if she would be able to continue to play.  Then she discovered wheelchair basketball. Bailey made the U.S. National Women’s Basketball Team last year at 16 and was one of the youngest players on the team. While she enjoys the travel, it has been incredibly hard work.

“I travelled to the Olympic Training Center in Colorado several times, and I got to represent the United States in the Netherlands and Germany last year,” she said. “This year we are playing in Thailand in May, and if I can play well, I’ll hopefully make the cut to go to Peru for the Pan Am Games in August.”

Globetrotting sounds glamorous until you hear her training schedule.

“I have nine workouts a week,” Bailey said. “I do three for strength, three for conditioning, and three for shooting. I try to compress them into six days so I can have Sundays off, but it doesn’t always work out. During the shooting workout, I have to shoot from different areas on the court, and then I log the percentages for the coach to see.”

That’s a lot of work – especially considering that Bailey is a junior in high school and has other interests. Bailey had to stop participating in theater this year, but she still manages to keep excellent grades, lead in student council, and play guitar and piano in two bands – one at school and one at church.

Is there anything this girl can’t do well?

“I’m not good at baking or responding to texts,” Bailey laughed. “Seriously, I love the training, but the hardest part is discipline. I have to say ‘no’ to a lot of things I want to do.” 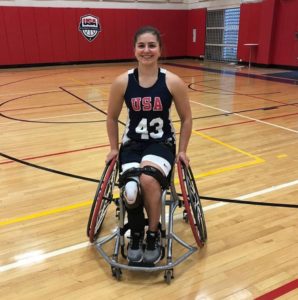 But it is paying off. She’s currently looking into college and knows she wants to continue playing ball. She also wants to help CURE put the full-court press on childhood cancer.

“In wheelchair basketball, there is a lot of strategy involving pressing,” she explained. “We press on defense just like stand-up basketball. On offense, we press to keep a player or two off our side of the court. The chairs take up a lot of room and keeping one pent up at mid-court makes more space for our offense to move around.”

Bailey is passionate about helping kids fighting cancer. Although she admittedly doesn’t have time to watch a lot of basketball, she will be playing CURE Madness and invites you to play too. For a $25 donation, you can fill in a bracket and have a chance to win a $200 gift card. Bailey offered three tips to pick a winning bracket:

Join Bailey for CURE Madness by signing up today.