When April rolls around, the Fenchak family will be preparing for another big day at Lauren’s Run & the CURE Annual Picnic. It’s gotten to be old hat for them since this will be the eighth time they’ve participated. The first time they entered, their son, Jackson, was only two years old – and he was fortunate to be there at all.

When he was nine months old, Jackson began to develop bruising around his eyes. His parents also noticed that he perspired more than normal. Exams by doctors revealed nothing until he was about to be sedated for an MRI. A routine check found his blood pressure to be 160/110 – almost triple the norm for a child under a year old. This concerned his medical team and rightly so. The MRI and ultrasound revealed a tumor the size of a soda can in Jackson’s abdomen.

The tumor ended up to be neuroblastoma. Making the diagnosis even worse, the tumor had metastasized to his eyes and that was the source of the bruising. Doctors told his parents that surgery was not an option because the tumor was wrapped around his aorta. But after chemotherapy proved unsuccessful, surgery became his only option.

“His surgery started at 5 am,” recalled his father, Chris. “They were still working on him when the staff started leaving for the day. The cleaning crew was mopping up and we were still in the surgery waiting room.”

Finally, after fourteen long hours, the surgeon came out and said they got 97% of the tumor. She considered that a great success. Chris is a pharmacist who had worked at Children’s Healthcare of Atlanta and knew many of Jackson’s physicians.

“I decided to trust the doctors completely,” he said. “It wasn’t easy, but I didn’t look things up on the internet and did everything we were told.”

Jackson began to improve and soon was thriving like any other toddler. After living through the cancer diagnosis, the Fenchak family felt a strong desire to give back. They first explored starting their own fundraiser until they discovered CURE’s Lauren’s Run and learned that the Laurens for whom the event is named both fought the same cancer as Jackson. It seemed like a natural fit.

“We met CURE early in treatment through the Open Arms meals,” Chris explained. “They were always in the hospital as someone besides the doctors we could talk to. We also like that they work locally in Georgia. So we can see the donations at work. That’s important to us.”

“This has been life-changing for us,” added Jackson’s mother, Shannon. “He was stage 4 at diagnosis so we know how lucky we are and we don’t take that for granted. We were blessed with great support while we were going through treatment and we always felt embraced by CURE.” 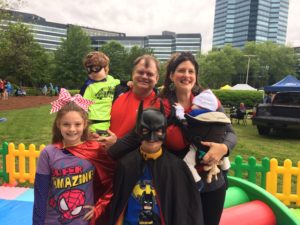 Jackson is a thriving ten-year-old now. He loves to wrestle and play baseball. And in the seven years since their first Lauren’s Run, Team Jackson has raised over $25,000 to fight childhood cancer. They have also fallen in love with the event itself.

“I love to see the children – especially the sick kids who get to take a day off from the hospital to run and play,” said Shannon. “It’s just a joyful afternoon. Whenever I get the chance, I try to meet the parents there who are in the middle of treatment. I hope that seeing Jackson will be an inspiration to them.”

Jackson inspires us, as does Team Jackson and the efforts of the Fenchak family.

There is room for you, too! Whether you are a childhood cancer family or not, you are invited to Lauren’s Run. We would love for you to sign up, join a team, or start your own team. This event is making a difference in the fight against childhood cancer. In its 24 years, Lauren’s Run has raised over $4.1 million toward better and safer cures for kids like Jackson. For more information, please go to www.laurensrun.com and plan on joining us on April 28.