A Nation Behind Me

On January 28, 2017, some friends and I held a fundraiser we called Hunting, Fishing and Praying for a CURE. This event was one of my proudest moments because I could give back to the community that has helped me for such a long time. Before I begin my story about such a life-changing event, I want to tell you what led up to this. When I was thirteen years-old, I was diagnosed with an aggressive brain tumor called anaplastic metastatic medulloblastoma. The doctors didn’t know what to expect or how long I might live. I am now proud to say that I am cancer free and twenty years-old, thanks to friends and family who have helped me throughout my life. Since my diagnoses, I am the strongest I have ever been, and I’m proud to give back to the community that has long given to me. 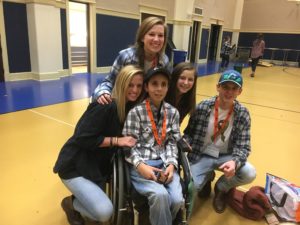 Back in September 2016, my brothers’ friends were holding some small fundraisers for Chip’s Nation Pediatric Cancer Foundation, and they raised about $5,000. Their hearts and passion for helping others were truly incredible. We decided to host a new fundraiser called Hunting, Fishing and Praying for a CURE. We invited thirty kids from fifteen different schools to help plan. When the planning began, we expected two hundred people to attend. As time went on, more and more people wanted to attend this momentous event. Two weeks before the event, we had sold five hundred tickets, were sold out and had a waiting list.

Hunting, Fishing and Praying for a CURE was held at Saint Luke’s Church in Dunwoody, Georgia. The church was kind enough to donate its facility for the night. Waffle House catered the dinner, and we had more than two hundred hunting and fishing themed raffle and auction prizes. We decided to donate the money raised to four charities representing care, research, hope and love. Children’s Healthcare of Atlanta took great care of me, CURE Childhood Cancer supports research endeavors, The Outdoor Dream Foundation gave me great hope through my passion for the outdoors, and dogs from Canine Assistants provide much needed love.

The event was hosted by Jaye Watson, a local newscaster and CURE supporter, and David Blanton, a professional hunter with Realtree Outdoors. I also had the opportunity to speak that night and give my message to the audience. I said, “You all gave me your time, money, and support during my fight against cancer, and I want to give back to the community and help somebody else.” I encouraged everyone to do what they could to help these fighting kids. The event ran smoother than anyone could have expected because it was organized completely by a group of teenagers. We raised about $85,000 that night, and after expenses, we were able to give the four organizations $18,000 each!

People may look at me and see a kid in a wheelchair with a really cute service dog and think, “Oh, that poor boy.”

But I am here to tell you – I’m good… No, I’m great. I have a loving family, supportive friends, and a Nation behind me.

My goal is to encourage that Nation to be a driving force in the fight against childhood cancer.