Your Piece of the Puzzle

Have you ever sat over a puzzle for endless hours searching for the last edge piece? It might be a color and pattern that should be easy to find and yet, among all of the others that look so similar, it can elude even the most relentless pursuit.

Sometimes the answer to a problem in real life can be just as elusive. Even when your soul yearns to help, the way to do so can be hard to find. Just ask Melissa. A few years ago, Melissa heard about a boy named Lake at her church who was fighting cancer for the second time. A mother herself, she felt an immediate connection with Lake’s mother who was about to have another child. Her heart went out to this family who were thrust back into a fight for his life and she felt compelled to do something. But she had no idea what piece she could play in this puzzle since she didn’t know the family personally.

Some people stop there. With the noblest of intentions, they scour the table, decide there is no way to find their piece and then put the puzzle in the box. They still feel bad and hope that someone will help, but they don’t continue to search for a way.

Not Melissa. She knew she had to do something. When Lake passed away in May of 2015, she was devastated. But that event cemented her calling to do something in his memory. 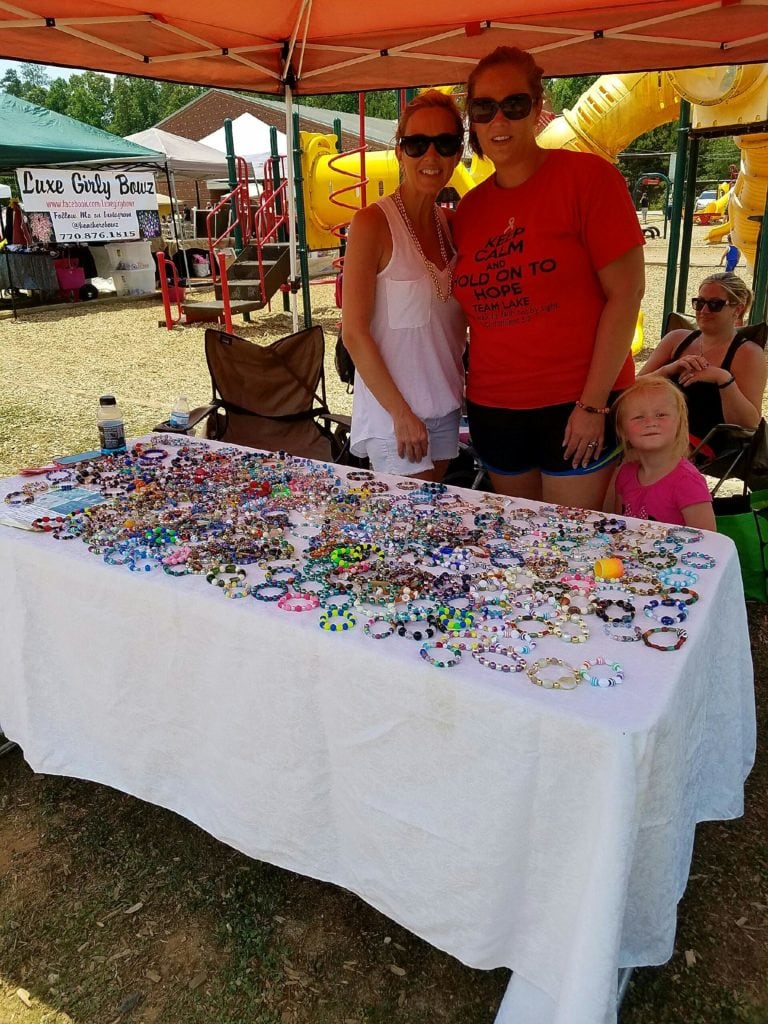 So she decided to raise money for CURE Childhood Cancer. The question of how she would go about doing that plagued her. As she considered the question, an idea of making and selling beaded bracelets began forming in her mind. This lead to even more questions because jewelry-making wasn’t something she had any experience with. But she took the plunge and decided to take up a new hobby with the hopes of honoring Lake and his family.

In August, she began to collect beads from broken jewelry, Goodwill, and friends who were willing to share their unwanted pieces and she made 400 bracelets. She sold them during September’s Childhood Cancer Awareness Month on Facebook for $6 apiece and when they were gone she had raised over $2000! This year she did the same thing and made $2700. She has received orders from as far away as Switzerland and Germany.

She has also met Lake’s mother, Anna, and the two have become friends. Melissa says that making jewelry for this worthy cause brings her joy. It is the part she can play – her piece of the puzzle.

What is your piece?

What can you do to help CURE support families fighting against cancer and fund research that will ultimately lead to a cure? Maybe you have a talent you can use or like Melissa, you could start something new. If you would like ideas, visit our Fundraising Page or send an email to [email protected]. We would love to help you find out where you can fit in.