CURE and the Handmade Home

Anyone who has a brother knows there is an ever-present threat of injury. The only questions are: how much will it hurt and will it force another trip to the emergency room. Jamin had many of those bumps and bruises growing up with his brother in Birmingham, and he inflicted a few of his own. During a particularly rough wrestling match in 1982, Jamin took a knee to the back that caused some discomfort. He didn’t think much of it until he noticed blood in his urine the next morning. 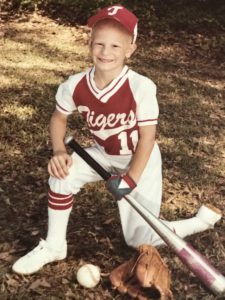 “You would think it would freak me out,” Jamin said. “But I was just a six-year-old kid… so I thought it was a pretty cool trick.”

When he shared his newfound ability with his mother, however, she raised the appropriate alarm. Jamin’s pediatrician was also concerned and immediately told them to go to the hospital. Doctors there discovered a large tumor on Jamin’s kidney. Both the tumor and the kidney were removed the next day and the ensuing pathology revealed it to be a Wilm’s tumor, the most common type of kidney cancer in children.

Wilm’s tumors often become quite large before they are noticed. So the blow from his brother likely hastened Jamin’s cancer diagnosis. At the time, Wilm’s tumors were being studied and treatments were rapidly evolving thanks to the work of Dr. Sidney Farber, founder of Dana-Farber Cancer Institute, and many other researchers. The cocktail of chemotherapy Jamin received in the early 1980’s, experimental at the time, is now the standard protocol for all kids with Wilm’s tumor, and survival rates have eclipsed 90%.

At the time, Jamin didn’t really think about what kind of chemo he was getting. He had some nausea and lost his hair, but it didn’t get him down. In fact, besides missing his friends sometimes, he was pretty happy to have excused absences from school and loved all of the presents he received.

“I really don’t remember feeling isolated although I’m sure I was at times,” he recalled. “As I got older, I began to understand what happened and the potential side effects. But I’ve had no problems at all.”

After receiving his degree at Auburn University, Jamin became a youth pastor. He and his wife, Ashley, now have three children and live in the Nashville area.  Ashley began looking for an outlet for her creativity, so she started writing about home design and renovation. In 2014, Jasmin and Ashley launched a full-time business, The Handmade Home. Together they create designs all over the country, work with brands, and offer tips and advice to those looking to improve their home. Their mantra is to stop pining away for the perfect home and make the house you live in one you love.

We met Jamin and Ashley when they entered the Frogtape Design Challenge and chose CURE as their charity of choice. While CURE didn’t win the contest prize, we gained something much more valuable – new friends!  We are grateful for Jamin and Ashley’s desire to help children fighting cancer so that one day, every child diagnosed will be able to live their dreams… just like Jamin has.