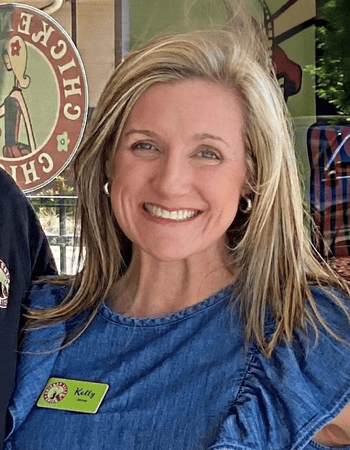 Kelly grew up in Athens, Georgia, and spent most of her time riding horses. She studied Equine Science and minored in Poultry Science at UGA. There she met and married her husband, Tim.

They moved around for a few years with Tim’s medical sales job before settling in Savannah in 2013 with their three children, Joseph, Lauren, and Audrey. Savannah is where they would open the first of several Chicken Salad Chick restaurants. Shortly after opening their first restaurant, they became involved with CURE’s Open Arms Meal Program. When she learned how much CURE does in our community for children with cancer and their families, Kelly knew this was an organization she wanted to work with.

After several successful years of fundraising on a local level, the entire CSC brand picked up CURE as a recipient during the Giving Card Campaign in November and December. Kelly is thrilled to be a part of the Leadership Council this year and hopes to bring more great local businesses into the mix.